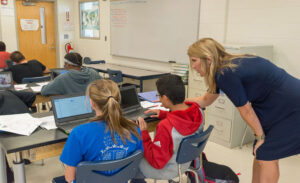 The A+ Foundation for West Aurora Schools High School Science Fund was created to honor Richard “Dick” Ebeling, a science educator who retired in 1999 but continued working in his field at Argonne National Library. While at West Aurora High School, he was instrumental in designing alternative methods of teaching the physical sciences through such courses as Phys-Ma-Tec (a combination of physics, mathematics and technology courses), Chem Comm (chemistry for the community), biotechnology, Sci-Ma-Tech, Food Sciences, and Fast I and II for middle school students. Dick worked on the adoption of a new, K-6 science education program, implementing foundations for science in those grades that fostered understanding and mastery of the sciences in the high school.

Mr. Ebeling has been the teacher most often mentioned by past Hall of Honor recipients. They have remembered his excellence in the classroom which extended to his excellence as a mentor for many of them. Mr. Ebeling’s impact was one that followed these students throughout their careers.

The West Aurora science enhancement project includes, but is not necessarily limited to, the following: