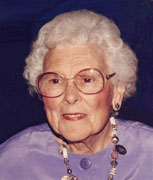 This fund was created to honor the Armbruster-Dieterich-Wagner Families for their contributions to the Aurora community.

The Armbruster Family has been influential in the building trades for over one hundred years.

The Dieterich Family was involved in Aurora musical organizations and the East Aurora Education System.

Ruth Wagner married banker Leslie Thomas Dieterich in 1932. He passed away in 1977.

Her second husband Albert Wagner (1911-2005) was an employee of the Armour-Dial Corporation for fifty years.