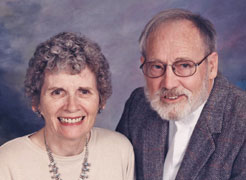 This fund, established to administer bequests received from the estates of Carl and Anne Baumann, provides grants to Mutual Ground, Inc. in Aurora and also for the Community Foundation’s discretionary grantmaking program.

Carl Baumann (1921-2002) was born in Scranton, Pennsylvania.  He received his medical degree from the University of Chicago and was a neurosurgeon in the Fox Valley area for most of his career.

During World War II, he was a topographer for the United States Army in France and North Africa.

She was an alderman for the City of Aurora, instructor at Waubonsee Community College and field representative for the Neighborhood Reinvestment Corporation in Washington, D.C.

She also produced and appeared weekly in Community Forum on Cable 12 TV.

Mrs. Baumann served on the boards of directors of the League of Women Voters, United Way of the Aurora Area, Family Counseling Service and People for Child Care.