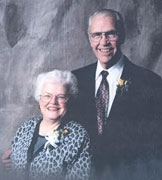 This fund provides scholarships to graduates of East Aurora High School who have excelled in the athletic program at the school and who have been involved in community service.

He played football for the school and also for the semi-pro team, the Aurora Clippers.

Mr. Bennett served in the United States Marine Corps during World War II.  He retired in 1983 after thirty years with Stephens-Adamson.

She later moved to Aurora and was a member of the East Aurora High School Class of 1940.

They raised four children who also were graduates of East Aurora High School.

Mr. Bennett was an ardent fan of the East Aurora Tomcat’s athletic teams. This fund was created to demonstrate the family’s pride in East Aurora and their desire to contribute to the educational success of its graduates.