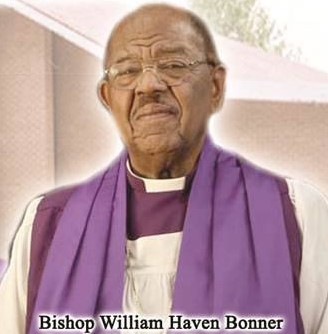 Bishop William Haven Bonner was born September 13, 1921 in Blytheville, Arkansas. He was the eighth of eighteen children. He attended DuSable High School and Moody Bible Institute in Chicago. In 1942, he married the love of his life, Dorothy Mae Green, and the couple had four children.

In 1949, Bonner moved his family to Aurora, Illinois and established the Greater Mount Olive Church Of God In Christ. In 1982, Aurora Mayor Jack Hill renamed the street the church is on to Bonner Avenue.

Bishop Bonner won several awards and accolades, including an honorary doctorate from the Trinity Hall Theological Seminary, and the Bishop William H. Bonner Park in Aurora was named in his honor. He was a pastor for seventy-two years and will be remembered for his constant giving. One of his favorite phrases was, “Giving is receiving.”

Bishop William Haven Bonner passed away August 29, 2016 at the age of 94. He was preceded in death by his wife, Dorothy Mae Bonner, his daughter Enyess Allen and his son Charles Edward Bonner. He is survived by two daughters, Willie Etta Wright and Dorothy Jones and many grandchildren and great-grandchildren.