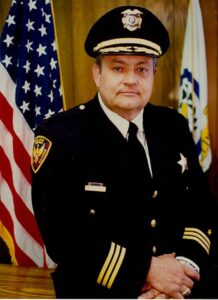 This fund was created to honor Robert E. Brent who served 28 years with the Aurora Police Department, including twelve years as Chief of Police. He passed away on May 5, 2016 at the age of 77.

Robert Eugene Brent was born in Thackeray, Illinois in 1939. Bob moved to Aurora in 1946 and graduated from East Aurora High School in 1957. He attended LaSalle Extension University of Chicago where he earned his Bachelor of Law degree. He also received training at University of Louisville, University of Illinois, Michigan State University, and the FBI Academy and the US Secret Service Academy.

While with the Aurora Police Department, Bob implemented of one of the area’s first SWAT teams, organized the area’s first cadet program, served on the Presidential family and candidate protection details, and acted as Chief of Detectives before becoming the youngest Chief of Police for a city and police department of Aurora’s size in the country at that time. Bob also served on the adjunct faculty of Aurora University and the Police Training Institute at the University of Illinois.

Following his retirement from the Aurora Police Department in 1989, Bob joined Alarm Detection Systems, Inc. of Aurora for fifteen years as their Director of Public Relations.

An active and dedicated community volunteer and leader, Bob began serving as a Scout leader before he had any children of his own, and remained active in Scouting for many years. He was especially proud of his involvement in Kiwanis Club. During his forty – four years with the Kiwanis Club of Aurora, he served as Club President and was Kiwanian of the Year. He was also responsible for the creation of the Golden K Kiwanis Club of Aurora. One of his proudest professional accomplishments was founding the Aurora Area CrimeStoppers. He was a long-time member of the Juvenile Protective Association, and an active member in the Illinois and International Associations of Chief of Police, along with many other professional and law-enforcement organizations.

Bob served on the Community Foundation of the Fox River Valley’s board of directors from 2005-2013. He was also on the former Mercy Hospital Foundation Board and was active in various civic clubs. Bob was a member of Holy Angels Church in Aurora.

Bob and his wife Jan were married for 55 years. They had two children, Mark and Ann Marie.