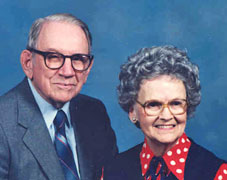 The Donald E. and Claire E. Brown Fund was created by family and friends to honor the couple for their dedication to the field of education.

In 1936, Mr. Brown was hired by East Aurora High School as a bookkeeping teacher and their first wrestling coach.

In 2002, he was inducted into the East Aurora High School Athletic Hall of Fame. After retiring from East High, Mr. Brown taught at Aurora College for nine years.

She then devoted the next thirty years of her life as a loving wife, mother and community volunteer. In 1952, she received her undergraduate degree from Aurora College.

For the next twenty-two years, she taught first grade. Most of her teaching career was spent at McCleery Elementary School in Aurora.