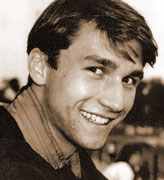 Todd Christopher Bryant was a graduate of Yorkville High School.  He achieved the rank of Eagle Scout with the Boy Scouts of America and was a member of the 4×800 relay team, which finished first in the Class A State Competition in 1989.

Todd received the Watonga Award (the highest award bestowed to a student-athlete) and the C.M. Hewitt MVP Track Award in 1990 and 1991.

Todd was employed by Smith Engineering Company in McHenry.

Scholarships in his name are awarded to graduates of local high schools.