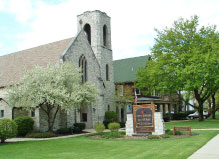 The fund was established by a generous donor who wishes to remain anonymous.

The first Mass was celebrated in the new structure in October 1899.  In November 1899, St. Joseph School opened on the first floor of the church.

As the parish grew, plans were made for the construction of a new church.  The first Mass in the present church was held in March 1956. The church is located on High Street in Aurora.

Services were held at the Healy Chapel on Downer Place until a new church building was constructed.

Groundbreaking for the church was held on Easter Sunday in 1942.  The structure was completed in November 1942.

The sanctuary was expanded in 1959 to accommodate the increased membership. The church is located on West Downer Place in Aurora.