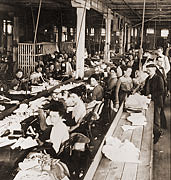 Two endowment funds were created by the board of directors of the Community Foundation to administer an unrestricted bequest received from the estate of Josiedell Carnes in 1980.

The Charles & Josiedell Carnes Endowment Fund supports student scholarships. It was established as an endowment in 1989.

The Josiedell Carnes Endowment Fund provides income for the Community Foundation’s discretionary grantmaking program.  It was established as an endowment in 1995.

Charles Carnes (1873-1959) was vice-president of Fowler-Carnes Clothing Specialties (pictured in this profile in the early 1900’s).

In 1914, he and his wife Josiedell (1884-1958) founded their own garment manufacturing company, the Charles Carnes Company, on South LaSalle Street in Aurora.

The company moved to Benton Street in 1931 and promoted itself as a manufacturer of men’s clothing specialties. The company closed in 1956.

Mr. and Mrs. Carnes had no children of their own, yet were devoted to causes fostering the education and development of youth.