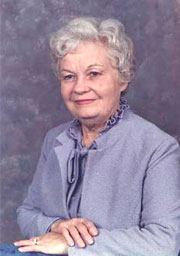 This fund was created through the receipt of an unrestricted bequest from the estate of Mary R. Chapman in December 2008.

Although her parents lived in Canada, Mary Chapman (1916-2007) was born in Wishaw, Scotland.

During World War I, her mother took a trip back to her birthplace in Scotland prior to the impending birth of her daughter.  Since passenger ships were unable to leave the country, Mary Chapman was born in Scotland.

She and her parents later moved from Canada to Michigan where she attended and graduated from Ecourse High School.  When she was in her forties, she became a proud citizen of the United States.

Her first husband John G. Neill passed away in 1963.  She then worked for the Aurora Country Club.

It was there that she met her second husband Josef W. Chapman.  They were married for nineteen years until his death.

Mrs. Chapman was a member of St. Anne’s Catholic Church and the Aurora Country Club.

She also volunteered for the Red Cross, Mercy Center Auxiliary and the American Heart Association.

Although her bequest was unrestricted, Mrs. Chapman was a great admirer of the nursing profession and her family requested that scholarships be awarded from her fund to students entering this life-affirming vocation.