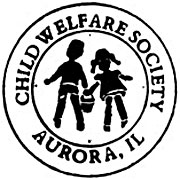 This fund was created to provide income for the educational, health and welfare needs of children.

This fund also supports annual scholarships for local students who are majoring in Early Childhood Education or Elementary Education.

The Child Welfare Society was established in 1938 to assist children requiring transportation to medical facilities.

The following year, the membership identified day care as a critical unmet need for the children of women working in defense industries.

The organization responded by opening the Jack and Jill Nursery School on Beach Street in Aurora.

Several years later, the school relocated to Clark and LaSalle Street where it remained for most of its history.

In 1997, it made its final move to the Carriage House at Mutual Ground on Oak Avenue. The school closed in the summer of 2001.

Funds to operate the school were raised by members who volunteered at the Gift Corner and through various fundraisers supported by the community.

The Gift Corner opened in 1949 at Copley Memorial Hospital. In 1986, the shop moved to its current location at Dreyer Medical Clinic on Galena Boulevard.