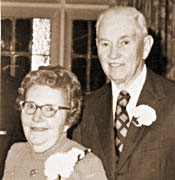 The Percy R. and Grace M. Council Memorial Endowment Fund was established within the Community Foundation to honor the lives of Percy and Grace Council.

This fund that was created upon the transfer of the Percy R. and Grace M. Council Foundation to the Community Foundation.

Percy Council (1893-1982) was a building contractor and realtor in Aurora.  He was instrumental in developing the Cherry Hill Estates in West Aurora.

Mr. Council was a star basketball player at Lincoln College. He also served in the United States Navy during World War I.

She later joined the faculty at Aurora College where she became chair of the Department of Education.