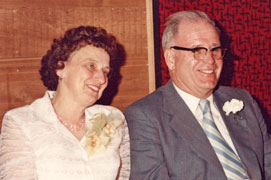 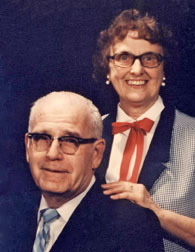 This fund was created at the time of Arthur Court’s death by his family and friends to honor this well-known and respected Aurora educator. The fund was established as an endowment in 1990.

Mr. Court (1911-1985) was a teacher in the East Aurora School System for thirty-six years.  He also served as the high school football and track coach.

Mary Ann Court McGray (1917-2012) was born in Aurora, Illinois to Peter and Marie Jungels. She was the last surviving member of an Aurora pioneer family.

Mrs. Court was the bookkeeper for the Kane County Recorders Office for many years and won awards for her rapid stenography and typing skills.

She also was a gifted pianist, knitter of intricate patterns, painter and seamstress, as well as an avid bridge and pinochle player.

Scholarships from this fund are awarded to outstanding graduates of East Aurora High School.

Mr. and Mrs. Court’s steadfast commitment to the ideals of high moral character and sportsmanship is the basis for the awarding of these scholarships.