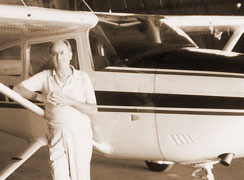 Scholarships from this fund are awarded to students entering the field of aviation.

Arch J. Dewey (1912-1988) was a well-known Aurora aviator who served in both the Royal Canadian Air Force and the United States Air Force.

He piloted the City of Aurora B-17 Bomber during World War II.  The bomber was so named to honor Aurora residents who purchased war bonds to finance the plane.

In remembrance of his love of aviation, his wife Jane created this scholarship to encourage and assist future students entering this field of study.