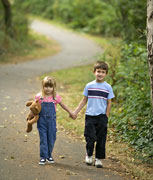 The Dunham Fund, founded by John C. Dunham, awarded a grant to CASA Kane County in 2010 to permanently benefit the “Grow A Healthy Child Program.”

The Dunham Fund, a private foundation, was created in 2006 to serve local charitable needs.  The foundation received its funding from the estate of John C. Dunham (1910-2006).

In 2010, the Dunham Fund awarded a challenge grant of up to $500,000 to CASA Kane County for the creation of a permanent fund to support the organization’s Grow A Healthy Child Program. This program will ensure the consistent delivery of quality services to local children.

“The Dunham Fund is pleased to provide this grant to CASA Kane County to preserve the critical services they offer to abused and neglected children. These services are provided entirely by private giving with no governmental support and I applaud the leadership of CASA for recognizing the need to endow their programs for future generations,” commented Stewart Beach, chairman of the Dunham Fund Board of Advisors.

CASA Kane County (Court Appointed Special Advocates of Kane County) was established in 1988 to recruit, train and manage volunteers who represent the best interests of abused and neglected children in the Kane County Juvenile Court System.

CASA volunteers are appointed to one case at a time and remain on the case until it is closed.  These volunteers help to ensure that a child’s right to a safe and permanent home is acted upon by the court in a timely and sensitive manner.

Today, there are approximately 200 CASA volunteers and twelve pro bono attorneys representing the best interests of abused and neglected children in Kane County Juvenile and Probate Courts each year.  Over 500 children are served annually by the organization.