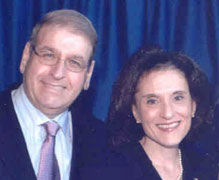 Howard Eagle (1946-2006) was born in Chicago, Illinois. He began his career as a small business owner and later became an educator at the Aurora Community School.

He was an inspiring teacher who challenged his students to reach for a future that would bring hope and promise to their lives.

Sherry Eagle is currently the executive director of the Institute for Collaboration at Aurora University.

She served as superintendent of West Aurora School District 129 for twelve years.

Howard and Sherry Eagle encouraged students to find their place in the world by believing in themselves. It is in this spirit that scholarships from their fund are awarded.