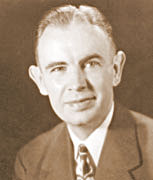 This fund provides scholarships to students pursuing a course of study in the School of Commerce and Business Administration at the University of Illinois at Urbana-Champaign.

Wesley Fisher (1908-2000) was born in Elgin, Illinois.  He was the valedictorian and president of the Class of 1925 at Elgin High School.

In 1929, he received a degree in Business Administration from the University of Illinois, where he was a member of the Beta Gamma Sigma Business Honor Society.

Mr. Fisher joined Illinois Bell Telephone Company after graduation and worked there for forty years until his retirement in 1969.

He and his wife Bernice were members of New England Congregational Church in Aurora.

He was survived by his son Thomas Fisher who retired as chairman and chief executive officer of Nicor in 2005.