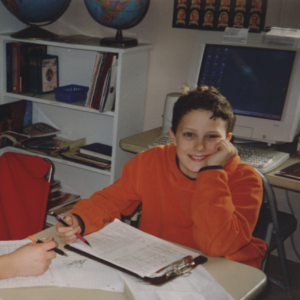 This fund was created to support Fox Valley Montessori School. Each year a grant will be given out to the school so they can offer the Jack Manion Memorial Scholarship in honor of Jack.

The Manions joined the Fox Valley Montessori family in 1998 when they moved to Illinois. Their oldest child, Jack, started school here after three years of Montessori education at a Children’s House in Minnesota. He attended FVMS from 1998 to 2004, finishing the elementary advanced (E2) program. Jack’s younger brother and sister also attended FVMS. The entire family supported the school, both by volunteering in and out of the classroom and serving as chair of the board of directors.

Jack’s Montessori experience prepared him well for the rest of his schooling. He earned his bachelor’s degree from the College of Wooster in Ohio, and he was an account executive for Quicken Loans/Rocket Pro TPO, where he worked since graduating from college in May of 2015. He played lacrosse in high school and college. Jack loved to read, cook, play cards and board games, watch movies, play video games, hike, ski, and cycle. He loved his wife and his family. He loved his corgis, Winston and Franklin, and his cats, Lily and Luna. He is sadly missed and happily remembered by everyone he knew.

In partnership with the Manion family and many generous donors, FVMS created this endowment through the Community Foundation of the Fox River Valley to offer a scholarship to a FVMS student every October to honor Jack’s birth month.

Mission statement:  The community of Fox Valley Montessori believes in the child as a whole being. We foster a community that builds global citizens through social and environmental responsibility, creative and critical thinking skills, leadership, and life management skills.

Organization History: Fox Valley Montessori School (“FVMS”) was established as a not-for-profit half-day preschool in the late 1960’s by a group of dedicated parents, committed to the philosophy of Dr. Maria Montessori.  Small classes were held in various church activity rooms until February 1977, when the school opened its doors at our present location at 850 North Commonwealth Avenue in Aurora, Illinois.

Throughout the 1980’s the enrollment grew to 100 children.  In September of 1991, the school doubled its physical size to nearly 13,000 square feet, remodeling the entire facility to allow for broader toddler services, an additional primary classroom, and the separation of elementary classes.  During the summer and fall of 1996, another 5,800 square feet were added in the form of a large activity room, including a stage.

In 2013, FVMS applied for and received a Dunham Grant, allowing the school to accept 20 at-risk children in the Primary classrooms.  FVMS celebrated its 50th anniversary in April of 2019, with a Gala celebrating current families and alumni.

Fox Valley Montessori School employs the Montessori philosophy and method developed by Dr. Maria Montessori. We believe that each child develops at his or her own individual pace and level. Our goal is to help children develop into independent, self-disciplined, and responsible life-long learners. The prepared environment and use of manipulative materials is very important in the Montessori classroom. Respect for each other, the environment, along with an opportunity for individual choices will guide the positive framework for each child’s education. The school is committed to the care and education of children.