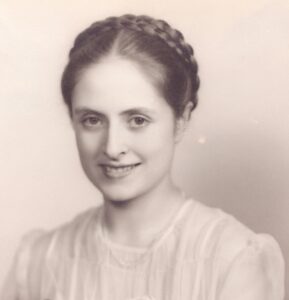 The Emily R. Frantz Scholarship for Public School Teaching Fund was established to provide scholarships to graduates of East Aurora High School who are pursuing a degree in education with a career goal of teaching in the public school system.

Emily Ravlin Frantz was born on May 31, 1917 on a farm in Kaneville, Illinois. Her family lost their farm during the depression, but were able to get back on their feet by the early 1930’s and relocate to the Bliss farm in Sugar Grove in 1932.

In 1934, Emily was enrolled in her first year of college when her younger brother Lloyd became ill with polio. She had to stay home on the farm and help take care of him. Emily never went back to college, but she and her husband Tom made sure that all four of their children graduated from college.

Emily married Thomas T. Frantz of Sugar Grove in 1939 in the living room of the Bliss Road farm house. They had met when she was the scorekeeper for the Kaneville baseball team and Tom played ball for the Sugar Grove team. They lived in Aurora during the war years, then in Sugar Grove from 1946 to 1952 in the oldest house in the township (which is now the office of the Sugar Grove Historical Society). Emily and Tom eventually moved back to Aurora where they remained. Together they raised four children, Tom, Jeffrey, Doug and Lois all of whom graduated from East High.

Emily was PTA President of the Sugar Grove Grade School, Center School in Aurora, and East Aurora High School. She worked at the Beacon-News and later at Brady Elementary School in Aurora as a teacher’s aide. She also sang in the choir and was active in Fourth Street Methodist Church for 54 years. Emily’s passion besides her family was her painting and artwork. She was a member of the Aurora Art League, showing her work in various art shows in the area for 30 years.

Emily was a quiet person, very hard working, but preferring to be behind the scenes. She placed a high value on education, often saying, “It’s one thing nobody can ever take away from you.” Emily died in 2007 and not a day goes by that her children don’t think of her with adoration.