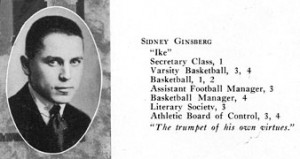 This fund was established upon receipt of a bequest from the estate of Colonel Sidney Ginsberg.

The fund supports scholarships for students graduating from East Aurora or West Aurora High School for attendance at a state-supported college or university located in Illinois.

After World War II, he returned to Aurora to manage the Ginsberg Store which was founded by his father Isaac Ginsberg.

In his bequest, Colonel Ginsberg included the following words. “The citizens of Aurora have been extremely good to me and to my business operations. The monies spent in my store (Ginsberg Store) by such citizens enable me to establish a trust and I hope by this method to repay them in some small manner.”

Colonel Ginsberg’s bequest was the first to be received by the Foundation.  Created in 1953, Mr. Ginsberg’s fund was established as an endowment in 1989.