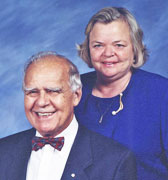 The Hermann & Rita Golter Scholarship Endowment Fund was established to provide scholarships to graduates of West Aurora High School who are studying in the field of International Business, International Relations or International Studies and who are fluent in a foreign language.  This fund, which was created in 2003, became an endowment in 2013.

Hermann Golter was born in Hoeheinoed, Germany. He was a German veteran of World War II and spent over five years as a prisoner of war in a Russian prison camp.

In 1955, he immigrated to the United States and worked for several businesses in the Aurora, Illinois area.

He was best known as the gentleman who worked at Robert Hall, a men’s clothing store, and later at Baskin Clothing from where he retired.

Mr. Golter was ever proud of his United States citizenship and expressed his appreciation through his sincere and moving testimonials.

Rita Golter lived in Glencoe, Illinois after arriving in the United States.  In 1961, she married Hermann Golter and took up permanent residence in Aurora.

Mrs. Golter worked for the West Aurora School District in the Special Education Department until her retirement.

As immigrants to this country, education was always of paramount importance to the Golters. This scholarship reflects their belief in the importance of international goodwill and understanding.