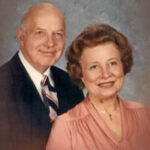 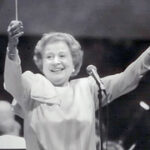 This fund was created in 2010 at the time of Lucille R. Halfvarson’s passing.  It became an endowment in 2011 through the gifts of many grateful friends and colleagues, and also through a generous grant from the A+ Foundation for West Aurora Schools.

All grants from the fund honor music educators Sten and Lucille Halfvarson whose leadership efforts in the Aurora community spanned elementary, high school, college, church and community choruses over a period of more than forty years.

The purpose of the endowment is to strengthen the vocal arts in West Aurora School District 129 in the areas of professional development, community initiatives and general programmatic improvements.

Income from the fund is intended for the support and benefit of vocal music teachers and choral directors at levels K-12 in West Aurora School District 129. The focus is both the professional development of these employees and the enrichment of the students and community.

Professional development of educators is intended to enhance the delivery of music education to District 129 students and may include, but is not necessarily limited to, the following:

Community enrichment may take the form of, but is not necessarily limited to, these activities:

General programmatic improvements are not limited to, buy may included, instructional materials and equipment intended to enhance the delivery of vocal music education for the benefit of district students.

Teachers and community members may apply for funding from this endowment through the A+ Foundation for West Aurora Schools. The procedures for applying for these grants will be available in 2012 on the A+ Foundation’s website: www.aplusfoundation.org

Sten G. Halfvarson (1915-2003) was born in Wilkinsburg, Pennsylvania. He was the son of Swedish immigrant parents.  His father’s work as a mechanical engineer for Westinghouse Corporation brought the family to Chicago in 1929.

Mr. Halfvarson attended Senn High School where his music education took root under the leadership of Noble Cain, a renowned composer-director who became his mentor.

As a high school baritone, Mr. Halfvarson was invited to sing in the Chicago A Cappella Choir directed by Cain.  He sang with this choir from 1929 until 1936 in concerts, on radio and on tour.

In the interim, he served his country in the United States Army Air Force as a B17 gunnery instructor from 1942-1945.

Mr. Halfvarson began his teaching career in Menominee, Michigan in 1937. He then taught at West Aurora High School from 1938 until 1979.

At West, he developed the choral arts program into one of the most respected in the state, creating the A Cappella Choir and showcasing their talents in the community as well as in other district schools and venues.

He also was the author and creator of two legendary West High songs, “Roll-On” and the West High Alma Mater. These two pieces stand as striking testimony to his loyalty and dedication to the school he served with distinction for nearly forty years.

In addition to serving on the faculty of summer music camps in nine universities throughout the United States, he was a board member of the Illinois Music Education Association. In 1960, he formed the Aurora Festival Chorus which continued to perform major choral works for fifteen years.

Mr. Halfvarson also was the director of music at New England Congregational Church where he was a member for forty-two years.

Lucille R. Halfvarson (1919-2010) was born in Petersburg, Illinois, the only child of Harris Morton and Lucille (Fox) Robertson. She grew up in Galva, Illinois.

Mrs. Halfvarson excelled in her studies, receiving her bachelor of arts and graduating Phi Beta Kappa from Knox College in Galesburg, Illinois in 1941.

She taught music and speech at Freeman Elementary School in Aurora from 1941-1944. It was during that time that she met her future husband Sten Halfvarson who was employed as a music educator at West Aurora High School.

When Mr. Halfvarson was called away to serve in the Army Air Force from 1942-1945, Mrs. Halfvarson left Aurora to teach high school music and direct a church choir in Galesburg.

She married Sten Halfvarson in Galva in 1946 and the two returned to Aurora where they raised their family.

For several years, she was a homemaker. She later began teaching private voice lessons in the family living room.

She also resumed directing church choirs, beginning at Our Savior Lutheran Church from 1950-1963, followed by a position at Westminster Presbyterian Church from 1963-1984.

Mrs. Halfvarson developed her own singing talents, specializing in oratorio. The soprano arias from Handel’s The Messiah formed the center of her repertoire, and she made her own mark through numerous performances in the greater Chicago area.

She became a voice student of Dr. Theodore Harrison of the American Conservatory in Chicago and in 1969 she received a master’s degree in music.

By 1957, the Halfvarson family had grown to include four children: Laura, Eric, Linnea and Mary.  Mr. and Mrs. Halfvarson moved to a home on Downer Place in Aurora, where they lived for over 50 years.

Expanding her impact in the field of teaching, she became an instructor of music and director of choral groups for Waubonsee Community College, in Sugar Grove, Illinois, when the college opened in 1967.

She established the Waubonsee District Chorus, which became known for its annual performance of The Messiah, held at Paramount Arts Centre. Under her direction, these concerts became a community tradition, which lasted for twenty-five years, from 1968-1992.

In 1976, she was named Woman of the Year by the Aurora YWCA. Other awards have included Recipient Distinguished Service Award from the Cosmopolitan Club of Aurora, 1983; Distinguished Alumni of Knox College, 1984; Paul Harris Fellow, Rotary Foundation of Rotary International, 1999.

She also was co-chair of the Citizens Advisory Committee for the Paramount Arts Centre in Aurora, founder and president of the United Arts Board Fox Valley, Fox Valley Arts Hall of Fame, 2001; residency director Metropolitan Life Affiliate Artist, Board of Directors of the Aurora YWCA, and director of the New England Congregational Church Bell Choir.

Further demonstrating their dedication to teaching music, Mr. and Mrs. Halfvarson commuted to Chicago to teach at the Merit Music Program. There, Mrs. Halfvarson served as a vocal instructor from 1982 until she retired in 1993.

In 2000, the couple was recognized by Aurora University and awarded honorary doctoral degrees, the academic highlight of this fruitful and gifted partnership.