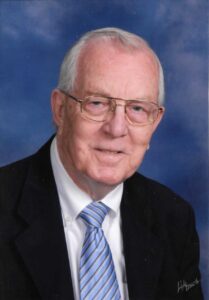 The John “Jack” Harkness Memorial Fund was established to support activities relating to mathematics and business through the A+ Foundation for West Aurora Schools. In addition, an annual scholarship will be granted to a senior scholar athlete planning to major in accounting, business or math.

John “Jack” Harkness was raised in Aurora and graduated in 1946 from East Aurora High School. After high school, John spent two years overseas in the Army with the occupation forces following World War II. Following those two years, he played football at Knox College while serving in the Army Reserves. He graduated from Knox in 1952 with a degree in Accounting. After a final stint in the Army, he was honorably discharged and began his accounting career and focused on raising a family with the love of his life, Mary. Together they raised four children: John (deceased 1972), Mary Ann, Susan, and Karen.

It was when his children began school, in the West Aurora district, that John became an ardent supporter of the Blackhawks. He was involved in the founding of the Blackhawk Boosters and served as its first president. He was active in making sure girls were given more athletic opportunities at the high school. He ran for the school board and was elected to a post when his youngest daughter, Karen, began kindergarten, serving as president for some of those years. When Karen graduated high school, John decided it was time to step down since he no longer had children in the schools. He was given an honorary West Aurora diploma for his service on the board. He served on the first board of the Foundation for West Aurora Schools, now the A+ Foundation.

John passed away in June 2018 and is dearly missed by his children and grandchildren. His passion for education was passed on to his daughters, who all became teachers.