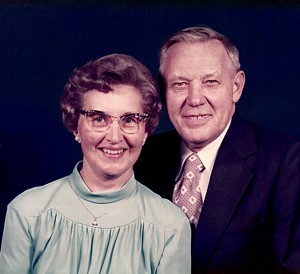 This fund was established to honor the lives of Aurora residents Bob and Betty Harris by their daughter Joanne.

The fund recognizes Mr. and Mrs. Harris’ belief in the importance of early childhood education and parental involvement in their children’s education.

Grants from the fund support the A+ Foundation for West Aurora Schools in its efforts to identify effective programs that enhance the opportunities for early childhood education and encourage the involvement of parents. Grants also support programs that assist struggling students.

Both were raised by parents who shaped their core values of hard work, self-sufficiency, and responsibility to family and community.

The Great Depression, which occurred when they were in high school, greatly impacted both families. Formal education beyond high school was not an option for either of them.

After graduation, Mr. Harris spent a year in the Merchant Marine. He then moved to the Aurora area where he found work at a local factory. It was during this time that he met his future wife Betty.

Shortly after Pearl Harbor, he enlisted in the Navy where he trained at Iowa State College to be an electrician. He served as chief electrician’s mate in the South Pacific through World War II.

After the war, Mr. Harris worked as an electrician for Rheem Electrical in St. Charles while attending Coyne Technical School in Chicago.

In the early 1950’s, he worked in the Research and Development Department for DuKane Corporation in St. Charles. Later he became plant engineer for the company, a position he held until his retirement in the late 1970’s.

Betty Harris graduated from West Aurora High School in 1940 and worked as a bookkeeper from graduation well into her 80’s.

Her first job was with the Chicago Motor Club, where she met Bob Harris when he came to the office to file insurance paperwork after a small “fender bender.”

They were married before Bob was sent overseas. During the war years, Mrs. Harris moved from coast to coast whenever and wherever her husband’s ship was in a home port.

After Mr. Harris’ discharge, they settled in Aurora. Throughout her career, Mrs. Harris worked for several Aurora area businesses, including the Nash automobile dealership, Inland Electronics, and Plaza Designs.

Bob and Betty Harris made their home in Aurora, where they raised their daughter and supported the community. They were among the first members of Westminster Presbyterian Church. Mr. Harris served for many years as facility manager. Mrs. Harris served as deacon and as church treasurer.

Family and friends knew they could count on the couple without reservation. Whether it was finding housing for a displaced family, caring for an elderly family member, remodeling a home for someone in need, helping victims recover from a flood, or listening to those facing a crisis, Bob and Betty Harris were the first to lend a helping hand.