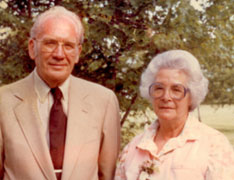 This fund was created in 1998 by former Congressman and Speaker of the House J. Dennis Hastert as a memorial to his parents Jack and Naomi Hastert.

The fund, which provides scholarships to students in Kendall County, Illinois, became an endowment in 2010.

He was a graduate of Joliet Township High School and the Worsham College of Mortuary Science.

From 1940 to 1960, Mr. Hastert was the proprietor of Hastert Farm Supply of Aurora and rural Oswego.

From 1960 through his retirement, he owned and operated the Clock Tower Restaurant in Plainfield and was Food Services Director at St. Joseph’s Hospital in Joliet.

Mrs. Hastert was a straight A student when she left high school and always valued education.

She worked hard throughout her life to make sure her children and grandchildren received the education she had not been able to receive. Her sons were the first in their family to earn college degrees.

Mr. and Mrs. Hastert were married in 1940 and had three sons – Chris, David and J. Dennis Hastert.