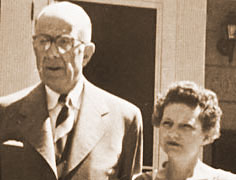 This fund was created to administer a bequest from the estate of Donald A. Heinz of Aurora.

Donald Heinz (1929-1995) was a member of Holy Angels Church where he volunteered at the church’s food pantry.

He served with the United States Army during the Korean War.

Mr. Heinz bequeathed a portion of his estate as a memorial to his parents, Arthur and Daphne Heinz (pictured here).

In 1961, he assumed a brokerage position with the Konen Insurance Agency.

Mr. Heinz was chairman of the Aurora Police and Fire Commission from 1949 to 1953 and served with the United States Army during World War I.