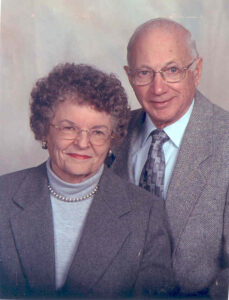 The Carl E. & Marilyn J. Hess Memorial Scholarship Endowment Fund provides scholarships to graduates of Aurora Central, Marmion Academy, and Rosary High School.  Carl Hess (1927-2014) was born in Aurora.  He was a graduate of St. Nicholas Grade School and Marmion Military Academy.  Mr. Hess served in the United States Navy at the end of World War II and during the Korean War.  After retiring from the plastering trade, he enjoyed refinishing furniture.  In addition, Mr. Hess played softball in Aurora for many years.  Marilyn Hess (1930-2020) also was born in Aurora.  She was a graduate of Sacred Heart Grade School and East Aurora High School.  Mrs. Hess was a homemaker and an artist.  Mr. and Mrs. Hess were married for sixty-one years.