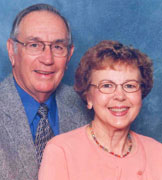 Scholarships from this fund are awarded to students graduating from high schools located in Oswego School District 308.

These scholarships support students pursuing a bachelor’s degree in nursing and also students studying in a field of their own choosing.

George Hettrich is a lifetime resident and farmer in Oswego Township.

After graduation from Oswego High School, he attended Northwestern University and the Chicago Board of Trade Grain and its Marketing School.

Mr. Hettrich was elected and has served in several Oswego Township and Kendall County offices.

Elaine Hettrich is a graduate of Oswego High School.  She received her R.N. from Copley Hospital School of Nursing and a bachelor of arts degree from Aurora University.

She was employed by Copley Hospital and later served twenty-five years as a nurse for the Oswego School District until her retirement in 1994.

Mrs. Hettrich is a member of several professional organizations and P.E.O. Chapter BT in Aurora.

Mr. and Mrs. Hettrich are members of the Oswego Presbyterian Church.