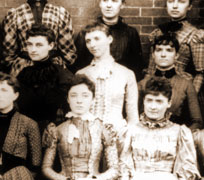 John Holden was born in Blackburn, England.  He immigrated to Aurora with his parents when he was two years old.

Mr. Holden was a baggage carrier with the CB&Q Railroad from 1886 until 1890.  He then became a conductor for the railroad and continued in that position until his retirement in the early 1930s.

For many years, he was in charge of suburban trains between Aurora and Chicago, and became well-known to hundreds of area commuters.

Alice Holden lived her entire life in Aurora.  She began her teaching career in 1882.

In 1909, she was appointed principal of Young School which was located on Fifth Street in Aurora.  She served in that capacity until her retirement in 1932.

Miss Holden also was a highly respected government weather observer, an unlikely avocation for a woman at that time.

She kept daily reports and sent them to the state and federal weather bureaus and to the local press.

Weather forecasters in Chicago and other cities looked upon her reports as models as they reflected accuracy and conscientiousness.

The Holden Endowment Fund was established in 1997 upon the transfer of three trusts administered by Merchants National Bank of Aurora in the name of the couple.

The resulting fund provides income for the educational needs of Aurora students.