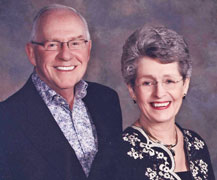 The Constance K. & Allen J. Kent Scholarship Endowment Fund was established to provide scholarships for students graduating from public or private high schools within the boundaries of Aurora School District 129 or 131 and also Marmion Academy.

Constance Kent, a native Auroran, graduated from Madonna High School and received a bachelor of arts degree from DePaul University in Chicago.

She enjoyed a career in marketing and journalism. She also held an Illinois Real Estate License.

Mrs. Kent has served on the boards of area organizations including Family Counseling Service, American Association of University Women and YWCA Aurora.

In addition, she has been a volunteer at the Dominican Literacy Center.

Allen Kent, a native of Jefferson, South Dakota, is a graduate of the College of Pharmacy at South Dakota State University.

He was on the pharmacy staff of Provena Mercy Center for many years and retired as director of pharmacy.

He has served on many professional boards, including the Pharmacy Practitioner Panel of The United States Pharmacopeia.