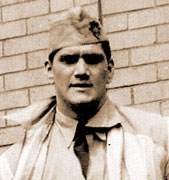 This fund was created by Wilfred Kramer for the unrestricted use of the Community Foundation.

Wilfred Kramer (1922-2004) was a graduate of Marmion Military Academy.

After high school, he attended Niagara and Marquette Universities and played on the football teams of both schools.

Mr. Kramer was a veteran of the United States Navy and served as a pilot during World War II.

He also played on the Navy football team. In 1943, he was selected to the College All Star Game.

After the war, he played professionally for the Cleveland Browns and the Buffalo Bills and later became a member of the NFL Alumni Association.