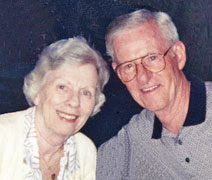 The Arnold E. and Donna Lies Family Endowment Fund was established to provide support for the charitable needs of the Aurora community.

Mr. Lies was a second lieutenant in the United States Army during the Korean War.  He was stationed at Fort Benning, Georgia and Camp Cooke in California.

For over fifty years, he owned and operated the Arnold Lies Company, a contracting firm responsible for the construction of many notable buildings in the Aurora area.

He gave back to his community through his service to Holy Angels Church, Provena Mercy Medical Center, Aurora Exchange Club and the West Aurora High School Sports Boosters Club.

At the time they created their fund within the Community Foundation, Mr. and Mrs. Lies commented: “We have created an endowment fund to provide an ongoing legacy for the benefit of the community in which we have lived and raised our family.”