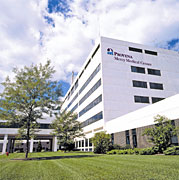 In 1992, Mercy Center for Health Care Services created an endowment fund to serve as a permanent resource for the institution’s future needs.

The original hospital (St. Joseph Mercy Hospital) was founded by the Sisters of Mercy in 1911.  In 1931, a 110-bed facility was constructed by the hospital on North Lake Street in Aurora.

In 1968, a new hospital was built on North Highland Avenue in Aurora, adjacent to Mercyville Institute of Mental Health.

The two institutions consolidated in 1971 and were incorporated as Mercy Center for Health Care Services. In 1997, the hospital merged with Provena Hospitals and was renamed Provena Mercy Medical Center.