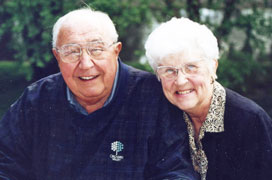 The fund became an endowment in 2009 to support the religious and educational efforts of Aurora Catholic schools in Aurora, Illinois through The Aurora Catholic Education Foundation.

He attended Purdue University for two years and then served as a flight instructor in the United States Air Force during World War II.

In 1946, he joined his father in the coal and oil business.  Three years later, they created the Michels Lumber Company.  Robert Michels owned and operated the business until 1994.

He was active in the Serra Club, Lion’s Club and the Knights of Columbus.

He and Patricia Raspiller were married in 1944.

Mrs. Michels (1924-2017) was a graduate of Madonna High School. She was a member of the St. Anne’s Society of Holy Angels Church and the Serra Club.

Mr. and Mrs. Michels attended Catholic grade and high schools, as did their nine children.  Their fund is a testament to their belief in and support of Catholic education.