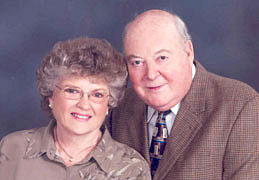 This fund was created to provide annual grants to local educational and charitable organizations.

Frank Miller is a 1951 graduate of Marmion Military Academy.  In 2002, he received the school’s prestigious Centurion Award for longtime public and community service.

He earned a degree from Aurora College in 1961 and serves as a member of the board of trustees.

He worked for Illinois Bell/Ameritech from 1952 until his retirement in 1990.

Mr. Miller was a member of the Kane County Board for more than twenty years, eight as chairman.

In 2004, the Orchard Road underpass was named the Frank R. Miller Transportation Plaza to honor his commitment to transportation and the citizens of Kane County.

He serves or has served on a number of boards and commissions including the Community Foundation, Rosary High School, Senior Services Associates, Fox Valley Park District Foundation, NIPC, the RTA and RTA Pension Trust as chairman.

Marianne Miller is a graduate of Madonna High School.  She is a member of Holy Angels Church and the church’s St. Anne’s Society.

She also is a longtime active member of the Child Welfare Society and has served as a Kane County election judge for thirty-three years.