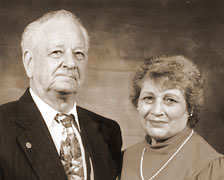 This fund provides scholarships to students of German descent who are graduating from a high school located within the Foundation’s service area.

He devoted a lifetime of service to the Boy Scouts of America.  He was active in Boy Scout Troop 29 at Domeier and Hermes Schools for over fifty years.

During that time he received every award given to those associated with the Boy Scouts.

His other civic activities included memberships with the Tiger Club and the Italian-American Club.

The Optimist Club presented an award to Mr. Miller in honor of his outstanding contributions to the community.

She was an active member of the PTA’s of several East Aurora Schools, was a Girl Scout Leader for eight years and a committee member of Troop 29.

This fund was created in 1998 and established as an endowment in 2000.