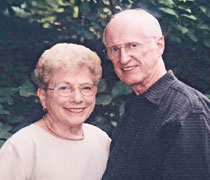 Barbara Biever Morrow (1930-2013) was born in Aurora. Her family heritage of civic service in Aurora, through the Biever Furniture Company, dates back to the company’s founding in 1881.

Following her graduation from Northwestern University, she had a gratifying career as a third grade teacher at Freeman Elementary School.

She was recognized for her achievements by West Aurora School District 129 with the “Golden Apple Award.”

Gerald Morrow (1924-2014) was a CPA and graduate of the University of Illinois.  He served as treasurer of the City of Aurora for eight years.

He was honored by election as president of the Illinois Municipal Finance Officers and as chairman of an Illinois CPA Society committee charged with rewriting the State of Illinois’ municipal accounting standards.

Mr. Morrow then served as treasurer of the Wadsworth Golf Construction Company for over thirty-five years. He later was elected to a four-year term as auditor for Kane County.

He also was an instructor for evening advanced accounting classes at Aurora University, president of the Aurora Kiwanis Club and an active participant in United Way.

During World War II, Mr. Morrow served his country as an Army Paratroop demolition specialist with the First Allied Airborne in Europe.