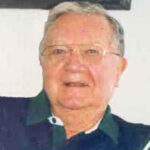 This fund was created to administer an unrestricted bequest from the estate of Robert Mukensturm.

He then served in the United States Navy.  Following his discharge from the Navy in 1951, he worked for the Aruba-Standard Oil Company.

He then joined the practice of Gillette, Starshak and Colletti at the Aurora Dental Arts Clinic where he remained for twenty-five years.

He was a member of the Aurora Turner’s Club, Amvets Post 103 and the Yorkville American Legion Post 489.