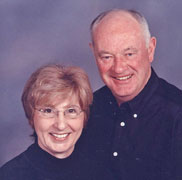 James Navota was born and raised in Aurora, graduating from East Aurora High School in 1960.

He attended the University of Denver, Valparaiso University and graduated with honors from Northern Illinois University with a degree in business administration in 1964.

He joined Barber Greene Company in 1965 following active duty in the United States Army Reserve. He served in many marketing and sales positions during his twenty-three years, leaving the company in 1987 as director of sales, construction machinery.

For the following two years, Mr. Navota was with the Old Second National Bank as a trust officer, employee benefits.

In June 1989, he joined Lyon Work Space Products holding various positions in marketing and sales, retiring as vice-president, sales and marketing for Sycamore Systems in 2006.

He has served on many industry boards and committees throughout his career.

After graduating from Marycrest College in 1964, Katherine (Kathy) Navota moved to Aurora to teach.

She was a classroom teacher, a reading resource teacher, the district Title I grant coordinator, the district reading/language arts coordinator and principal of Rose E. Krug Elementary School from 1993 until her retirement in 2006.

Mrs. Navota received her master of education degree in educational leadership from National Lewis University in 1991.

She is active in the Aurora Area Retired Teachers Association, Delta Kappa Gamma educational sorority and DD Chapter of PEO Sisterhood. She also served on the board of directors of the Community Foundation from 2007 to 2016.

Mr. and Mrs. Navota were married in April 1967 and have two sons Jonathan and Jason.