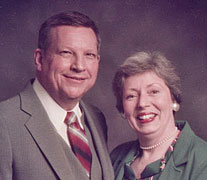 This fund was established by the family and friends of Donald Nelson (1926-1997) as a memorial to one of Aurora’s most outstanding civic leaders.

Mr. Nelson was employed by the Old Second National Bank for thirty-six years.

He was a member of St. Mary’s Church, Aurora Kiwanis Club, Knights of Columbus and numerous other civic organizations.

In 1980, the Cosmopolitan Club of Aurora bestowed the “Distinguished Service Award” to Mr. Nelson and, in 1991, the Aurora Kiwanis Club awarded the “Service to God and Fellow Man Award” to him.

Annabelle Keefe passed away in 2016.

This fund was created in 1997 and established as an endowment in 1998.