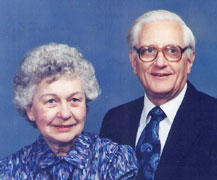 This fund was created by Marian Newell as a memorial to her husband.

Frank Newell (1915-2000) was a graduate of Millikin University. He retired from Nicor in 1975 after thirty years in various accounting positions.

Mr. Newell was an instructor of Celestial Navigation in the Army Air Corps during World War II.  He also was a member of New England Congregational Church in Aurora.

She is a member of New England Congregational Church in Aurora.