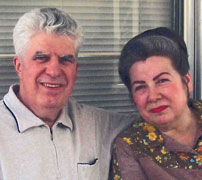 John Nichols (1936-2005) was born in California. As the son of a career U.S. Navy officer, he was living in Hawaii during the bombing of Pearl Harbor.

His family later moved to Seattle, Washington where he completed his high school education.

Mr. Nichols then enlisted in the U. S. Air Force and was stationed in Morocco. He earned degrees in chemistry and geology before settling into a thirty-year career with the United States Government.

Peg Nichols (1942-2006) was a graduate of Fenn College.  She pursued graduate studies at Kent State and the University of Utah.