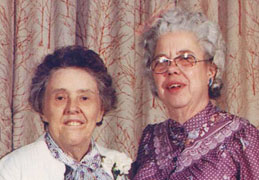 This scholarship was created by Marie Oberweis as a loving tribute to her sister Irene.

That year, she started her career with Oberweis Dairy where she later became a partner with her father Peter Oberweis and her brother Joseph Oberweis.

Irene Oberweis (1924-1996) attended Annunciation School in Aurora.  She spent many years of her life in hospitals due to fragile health.

In gratitude for the exemplary care her sister received throughout her lifetime from those in the nursing profession, Marie Oberweis created a permanent scholarship fund to support area students entering the nursing field.