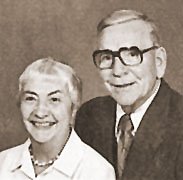 This fund was established upon the receipt of an unrestricted bequest from the estates of Merrill and Frances Olson.

The fund distributes income for the general purposes of the Foundation.

Merrill Olson (1919-1987) was born in Mankato, Minnesota.  He was a graduate of Gustavos Adolphus College and attended St. Paul College of Law.

Mr. Olson worked for the William H. Ziegler Company of Minneapolis until 1962 when he moved to Aurora.

He retired in 1977 as a vice-president of the Barber-Greene Company.

Frances Olson (1911-2004) was born in Amboy, Minnesota.  She was a graduate of Amboy High School and attended Mankato State Teachers College for several years.