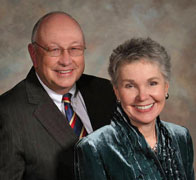 Neal Ormond III and Mary Clark Ormond, in the firm belief that educators are key social ingredients in every community, established a fund in their names in 2011 to encourage exemplary teachers and other educators of School District 129 to pursue ongoing professional development and to reward effective teaching and learning strategies.

Neal Ormond has lived in Aurora almost his entire life.  In his professional career he served as a vice president of the Quaker Oats Company, and he retired in 1995 after nearly twenty years as vice president of Human Resources for W. W. Grainger, Inc.

He has gifted the community for nearly half a century by founding and leading such organizations as the A+ Foundation for West Aurora Schools and the West Aurora Sports Boosters, and serving as a long-time board member and president of School District 129 and chairman of the Community Foundation of the Fox River Valley.

For more than fifty years he has volunteered innumerable hours coaching youth and high school basketball, tennis, softball, cross country and track and has served as the radio and television Voice of the West Aurora Blackhawks sports teams.

A native of Chicago, Mary Clark Ormond served as head of the Aurora Public Library in the 1970s and as a volunteer has served as president of such organizations as the Aurora Historical Society, the Tuesday Garden Club and the Aurora Festival Association.

She served on the board of the Community Foundation for twenty years and remains involved with the scholarship program.

A dedicated gardener, she has worked on projects throughout the community with especial devotion to trees.