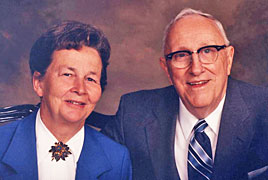 This fund was created at the time of Margery Ormond’s death to honor her lifetime of service to the needs of others.

Margery Ormond (1916-1989) was born in New Jersey and was a graduate of Barnard College in New York City.

She was a prominent Aurora civic leader who was an effective advocate for many community causes related to educational excellence, racial equality and fair housing.

In 1939, the United States Department of Labor named him the first administrator of the Fair Labor Standards Act in New York State.

In 1943, Mr. Ormond became assistant to the president of Lyon Metal Products in Aurora where he served as vice-president until his retirement in 1978.

Neal Ormond was a director of the Community Foundation for twenty-four years, serving as chairman for two of those years.  He also was a senior or emeritus director for five years.

In addition, Mr. Ormond was a director of many civic and professional organizations.

This fund was created in 1989 and established as an endowment in 1990.