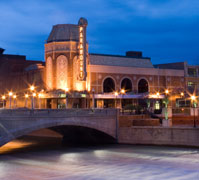 The Paramount Arts Centre Endowment (PACE) was created in 1983 to build a permanent fund to support the Paramount Theatre and the auditorium in North Island Center (now Copley Theatre).

Anne S. Goldsmith (1917-2009) served as president and chairman of the board of PACE from its inception until her death in 2009.

It was she who provided direction for the creation and development of the endowment.

In 1998, the board of directors of PACE voted to transfer the endowment to the Community Foundation for the permanent protection and management of the fund’s assets.

The Paramount Theatre opened in 1931. The facility was restored to its original grandeur in 1978.

The beautiful art deco theatre was placed on the National Register of Historic Places in 1982.

The Paramount Theatre presents a variety of quality performances and educational opportunities for citizens of all ages.