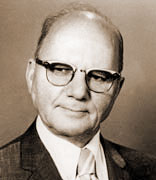 An unrestricted bequest was received in 1989 from the estate of Fred W. Schussler.

In 2002, the Foundation reestablished the fund as an endowment to ensure ongoing recognition of his generosity.

Fred Schussler (1904-1988) was born in Joliet, Illinois. He moved to Aurora in the early 1920’s to launch a specialized automotive business.

From the end of World War II, he was actively engaged in residential and industrial property management.