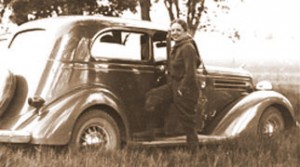 This fund was created by Margaret Mercer Stewart to support the education of nursing students.

She was drawn to nursing, graduated from the Evanston Illinois Hospital School of Nursing in 1934 and then served as a school nurse in Evanston.

In 1935, she married Thomas Graeme Stewart, a descendent of the pioneer Stewart farming family of Tamarack (now Plainfield) Illinois.

The couple resided on and farmed the ancestral land from 1937 until Mr. Stewart’s death in 1970.

Since that time, Mrs. Stewart continued to live on the farmstead and rented the land for agricultural purposes.

She was able to achieve her wish of living on the farm until her death due in part to the care provided by her home health care aides.

Mrs. Stewart was an artist, skilled in several media including pastels, oils and watercolors. She won numerous awards at both local and state levels.